In her short high school career, Katie Altieri just never seemed to put it together at a PSAL City Championship meet.

After famously getting tripped up in the back stretch of the 3,000-meter final at last season’s outdoor meet, Altieri sought redemption this cross country season but lost out to Brooklyn Tech’s Lucinda Doogan for the top prize in a foot race.

“Last year I was so close to making the State meet. I felt like I was in good position before I got tripped,” said Altieri. “After that I really made it my main goal for the season to qualify on the track." 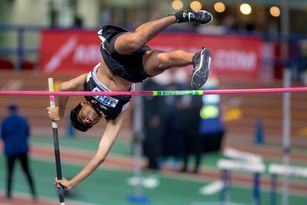 “My plan was to sit and kick,” added Altieri. “My coach has been concentrating on a lot of speed work lately. After barely scoring last year, I see it definitely paying off.”

MSIT’s Cassidy Williams brought back a City title, winning the 1,000 with a time of 3:03.27, her best time in nearly two years.

“It really surprised me the way the race turned out,” said the Columbia-bound senior. “I expected the top girls to lead the race but it really was the girls from the back. I think I only led the last lap.”

Added Willliams, “I always felt like I was the same runner I was two years ago. Back then I had a lot of senior girls to train with to push me. I’m just happy I’m starting to get back to where I was.”

Paul Robeson was the easy winner in team scoring with 83 points followed by Young Women’s Leadership in second with 63 and Cardozo with 60.

Susan Wagner was the top Island team, taking fourth with 38. Nadia Beck (2nd in the Pole vault, 8-2) and Christina Groleau (3rd in the weight throw, 41-10 1/2) also added podium finishes for the Falcons.