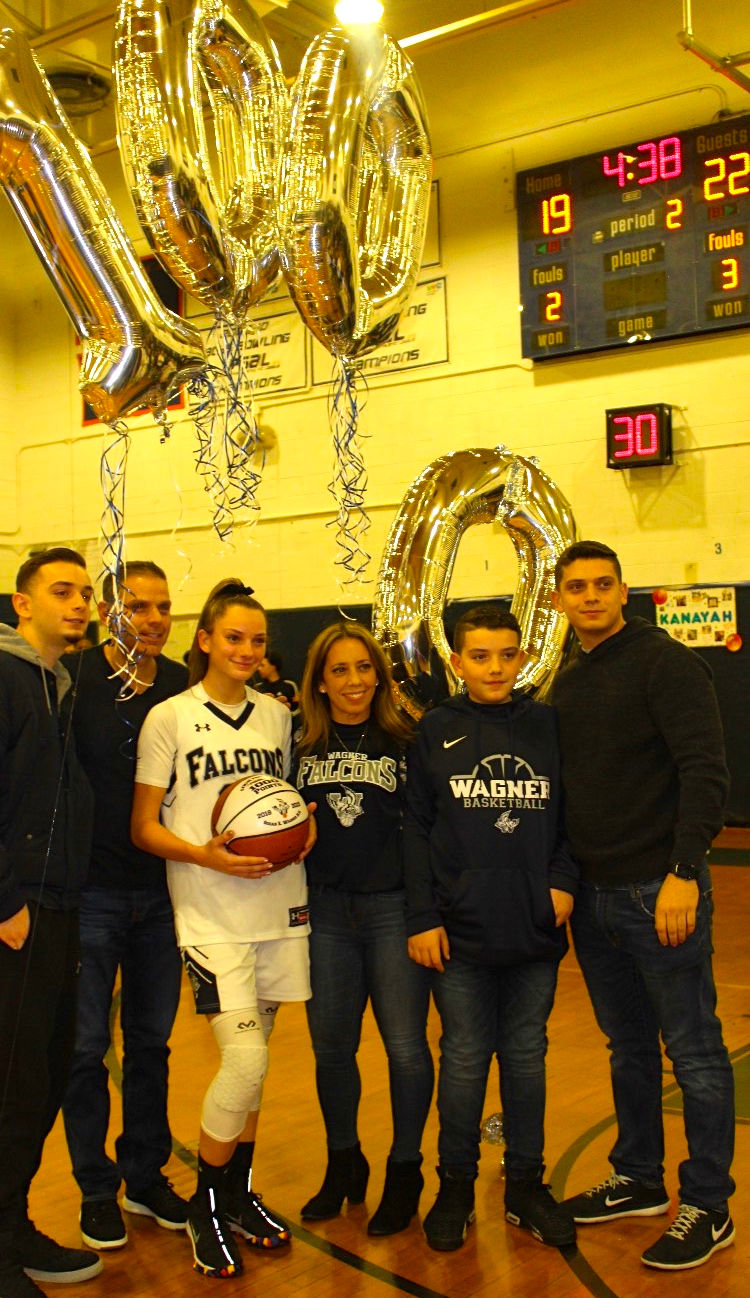 Courtesy of the Priolo family
A magical night

Thursday night could not have been more perfect for the Susan Wagner girls’ basketball varsity team.

For starters, the host Falcons topped Island-rival Tottenville, 63-45, to finish the PSAL Island regular season unbeaten at 14-0, which is believed to be a first for the program. The history-making win also came on Senior Night and senior Denise Priolo netted her 1,000th career point in the first half.

Priolo, a Castlon Corners resident, entered the game needing seven points to reach the illustrious milestone, but she didn’t get it until midway through the second quarter. It came on a deep trey after she received a pass from Kanayah Britt.

“It was very exciting,” Priolo said. “The gym was packed and after I did it my teammates rushed the court and tackled me."

All the while the school's marching band played in the background.

“Actually, I really didn’t know I was that close to reaching 1,000 points until a couple of games ago," added Priolo. "I was just so focused on the season and winning.”

In the photo above, Denise Priolo stands with her family after she reached the 1,000th-point milestone. 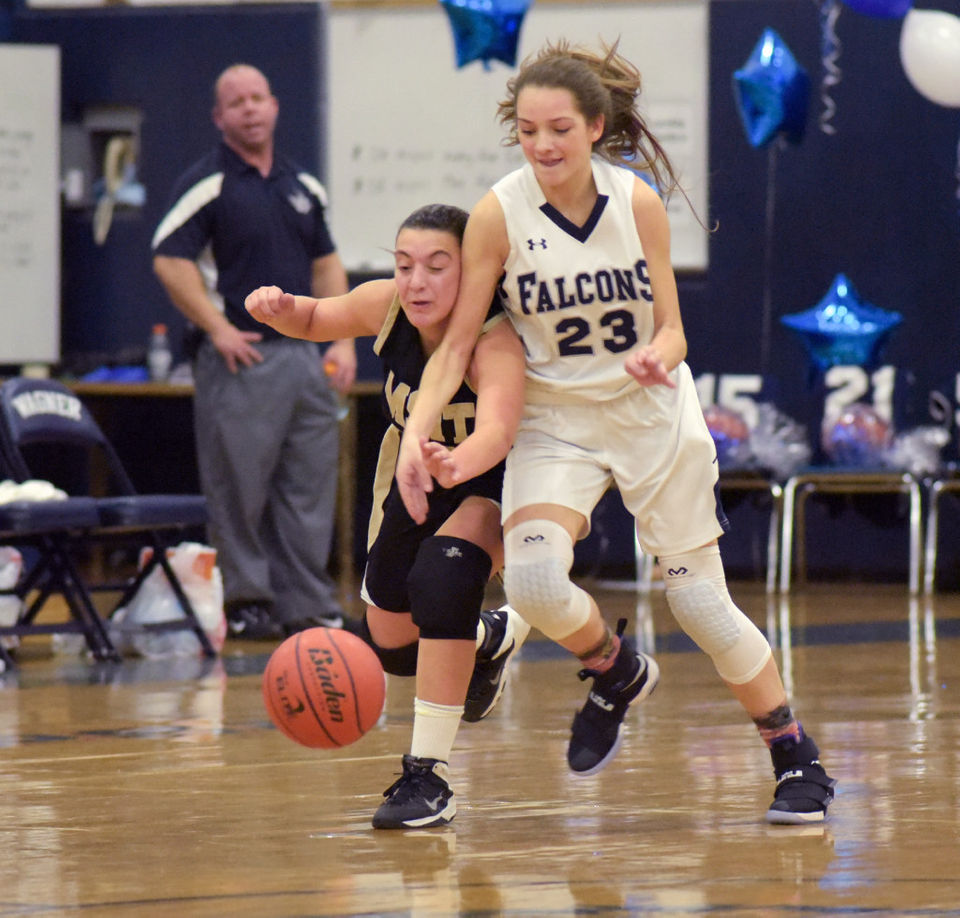 Priolo credited the Pirates’ defense for keeping her in check in the first half.

“They were boxing-one-and-me,” said Priolo of Tottenville’s defensive alignment. “I was just happy to do it when I did.”

"This was without question the most stressful Senior Night in my 20-plus years of coaching,” said Rizzo. “We were celebrating five very special seniors who have done so much for our program competing against top teams from around the city. We also had Denise seven points shy of her 1,000th point. When you add playing Tottenville to the equation, there were just so many emotions and anxiety leading up to this game.

“I saw my nightmare play itself out that first half. Everything Tottenville threw up seemed to only find net. We discussed handling our emotions and trying to remain focused on our ultimate goal which was getting the win. Truth is when Denise finally hit that three midway through the second quarter for her 1,000th point, we all seemed to breathe a lot easier and finally started playing more like ourselves."

The first half belonged to the Pirates as freshman Dayna Mercogliano (12 points) and junior Gabrielle Avallone (eight points) set the tone early building a nine-point advantage in the second quarter.

The Falcons ended the half down 29-28 but the momentum seemed  to swing in their favor entering the second half. SW’s defensive pressure helped it build a 20-point lead eventually outscoring Tottenville 35-16 in the second half.  Priolo led the way with 17 points, Kadiyah Britt added 14 points and Kanayah Britt 13 points.

Video provided by the Priolo family
Watch the celebration here

When it was over, Priolo said she was equally proud of what she and her teammates accomplished.

“They both mean a lot to me. But to go undefeated says a lot about the team we have. We made history.”

"It’s a well-deserved honor for a special young lady,” said Rizzo. “Denise has been a phenomenal student-athlete since joining our varsity team her freshman year. She came into our program a young, gritty, humble player. By the end of her sophomore season, her jumper really started to raise eyebrows. Being undersized as a team, we used Denise as a stretch for her junior season. It was a breakthrough year for her. Coming into her senior year, we knew we had one of the best shooters on the Island. We never really spoke about the 1,000 points.”

Priolo also said she was happy to it for her coach.

“He has supported me from day one,” she said. “After I scored my 1,000th you could tell how happy he was too.”

Now, Priolo and Co. will turn their attention to the PSAL city playoffs, where they are seeded fourth.

“We have what it takes to win the PSAL championship,” warned Priolo. “I think when we play as a team no one can stop us.”

As for the seniors, Rizzo had nothing but praise for the group.

"I'll remember Kanayah, Kadiyah, Heather, Maria and Denise not for their individual basketball accomplishments, but for what they accomplished as a team,” said Rizzo. “They are five young ladies who made Susan Wagner girls basketball what it is today — S.I. PSAL League Champs 2018-2019. They are ending their high school basketball careers headed into the PSAL AA playoffs. I just want to see their magic carry us onto the biggest stage of them all for a city championship. That would be the ultimate ending!" 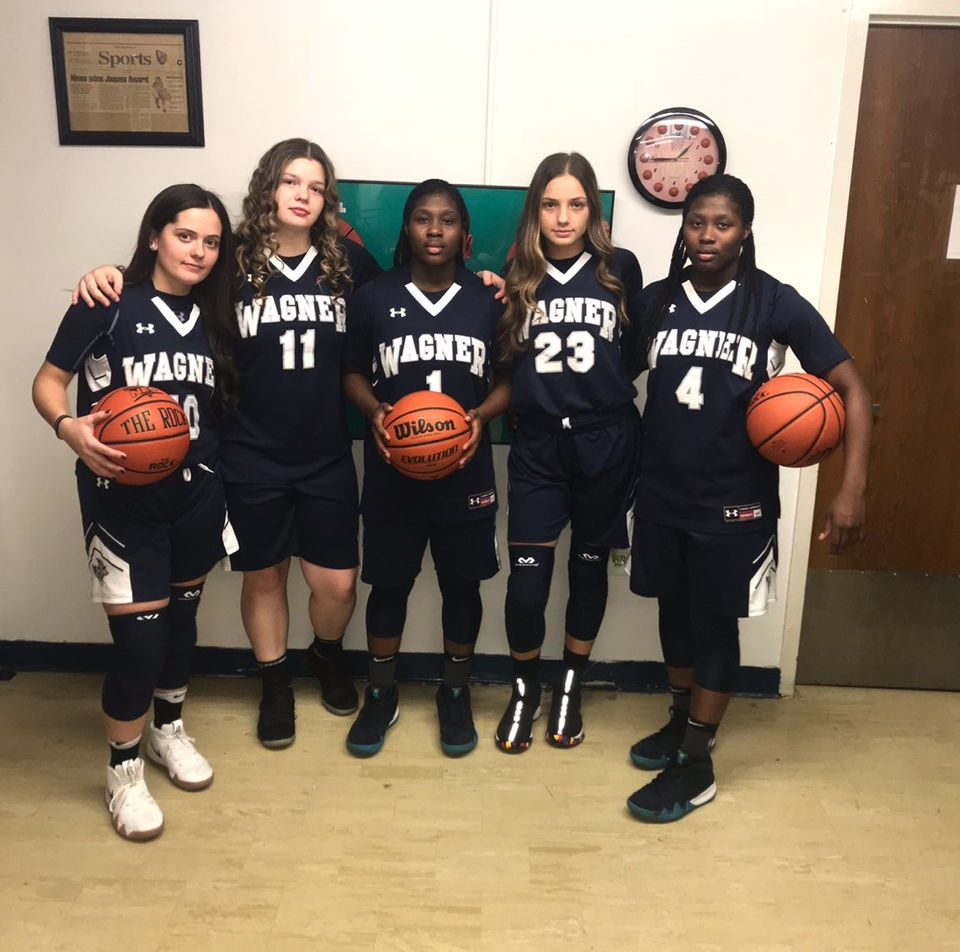 The Falcons trailed for for more than 3 1/2 quarters on Saturday until seniors Heather Caroccia (scored on a pick and roll with a minute left in the game), Denise Priolo (huge trey) and Kanayah Britt (converted clutch free throws with 6.5 seconds left in the game) to seal the non-league win.

"It was a great game to finish our regular season," said SW coach Tom Rizzo. "We knew Brooklyn Law & Tech was talented and that this game would be the perfect primer going into the PSAL AA playoffs. Our shots weren't falling and foul trouble continues to be our Achilles hael lately. I was very happy of how we kept our poise and were able to execute timely plays to get big baskets. We'll definitely need more of that heading into the playoffs."